The August 2013 S&P Case Shiller home price index shows a seasonally adjusted 12.8% price increase from a year ago for over 20 metropolitan housing markets and a 12.7% change for the top 10 housing markets from a year ago.  Once again price increases are on high for homes.  Home Prices, not seasonally adjusted, are now comparable to June 2004 levels and are quite bubbly in many cities.  America is now only 20-21% away from the peak of the housing bubble.  Graphed below is the yearly percent change in the composite-10 and composite-20 not seasonally adjusted Case-Shiller Indices, where the annual change for both was 12.8%.

This is the largest annual increase in home prices in seven years.  Home prices only increased greater in February 2006, right before the start of the great fall.  Below is a graph of the annual change in the S&P Case-shiller home price composite-20 and composite-10 indexes.  Notice how in March 2006, annual increases are at a cusp and early 2006 is the start of a long slide down.  If we are having housing bubble déjà vu, let's hope the pattern does not continue. 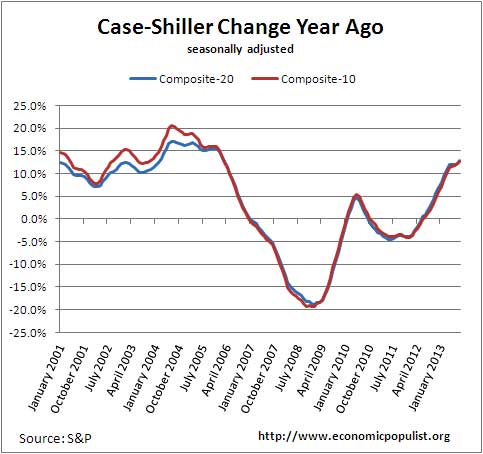 Below are all of the composite-20 index cities yearly price percentage change, using the seasonally adjusted data.  Las Vegas is a bubbling cauldron of trouble as prices have increased over 29% from a year ago.  Remember, Nevada has the worst unemployment rate in the nation, so it is unfathomable these are real people buying these homes and not investors and flippers.   San Francisco is also on fire, a 25.4% annual home price increase.  There are reports San Francisco is so unaffordable workers are bused in from long distances where they can afford the rent.  California generally has returned to complete unaffordable housing and if anyone recalls California was a ground zero for the bubble collapse.  Overall home prices are soaring out of reach again for the majority Americans, nationwide. 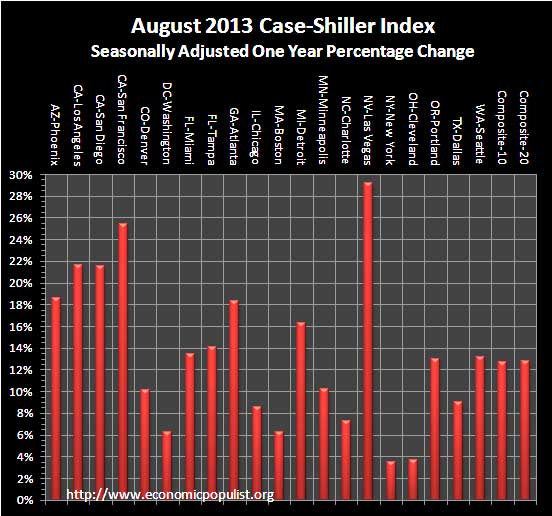 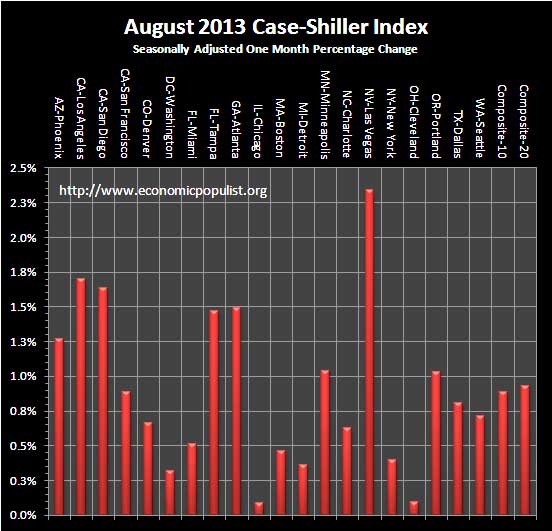 Below are the seasonally adjusted indices for this month.  The index itself tells you what has happened to home prices, per city, from the year 2000.  Only Detroit is below their 2000 home price values, even with 26 months of price gains and Cleveland is just barely at 2000 price levels.  Then look at LA, a city rife with poverty.  Home prices have doubled since 2000.  Clearly LA represents a land of the privileged few and the rest.  Dallas and Denver are at all time highs as well.  One must wonder about Washington D.C., we think corruption in policies pays handsomely, while assuredly regular workers in the area are having a nasty time affording any sort of housing.

Here's what S&P claims about prices leveling off.  Bear in mind they said this last month, yet soaring prices seem to still be happening.

The monthly percentage changes for the 20-City composite show the peak rate of gain in home prices was last April. Since then home prices continued to rise, but at a slower pace each month. This month 16 cities reported s maller gains in August compared to July. Recent increases in mortgage rates and fewer mortgage applications are two factors in these shifts.

To Season or Not to Season, That is the Question:

The S&P/Case-Shiller Home Price Indices are calculated monthly using a three-month moving average and published with a two month lag.   Their seasonal adjustment calculation is the standard used for all seasonal adjustments, the X-12 ARIMA, maintained by the Census.

The turmoil in the housing market in the last few years has generated unusual movements that are easily mistaken for shifts in the normal seasonal patterns, resulting in larger seasonal adjustments and misleading results.

To see S&P's argument in action, look at the below graph.   The maroon line is the seasonally adjusted national index, reported quarterly.  The blue line is the not seasonally adjusted national index.  As we can see before the housing bubble burst, we see a typical cyclical pattern difference between the seasonally adjusted and not seasonally adjusted data points.   Yet after the bubble burst we see large swings, which would throw off a seasonal adjustment adaptive algorithm.  This is going to become a major question among statisticians, how does one adjust for seasonality in the face of tsunami like economic events?  Is it now long past the housing bubble collapse, yet we can see the seasonal adjustments still are not completely matching up from the year ago percent changes, which implies they are still off statistically.

S&P does a great job of making the Case-Shiller data and details available for further information and analysis on their website.

Here is our Case-Shiller past overviews as well as the overviews of residential real estate statistics.

The war on the middle class - 228347 reads
House discusses 401k/IRA confiscation - 238306 reads
The Economic Populist Site Rank, Statistics and All of That Jazz - 134963 reads
How Many Jobs Are Needed to Keep Up with Population Growth? - 265542 reads
Progressive Alternatives To The Current Economic System - 18487 reads
Fired America - 45674 reads
U3 and U6 Unemployment during the Great Depression - 257490 reads
Help Build The Economic Populist - 60478 reads
A Proposal for True Keynesian Economic Stimulus - 26764 reads
S&P Downgrades the United States to AA+ - 34002 reads